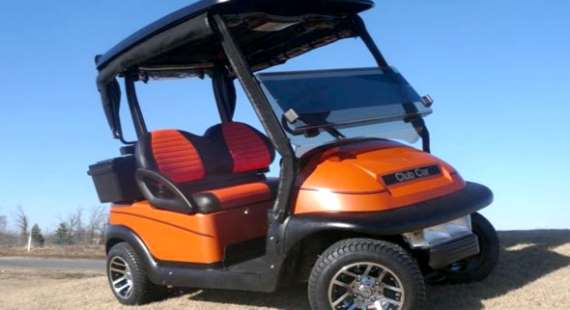 If you want to get the maximum top speed out of your Club Car Precedent it will involve your cart to be reprogrammed to a controller setting of a non-stock 5.


Must have THE CODE 5 PROGRAMMER From here to get things started.

While holding the Code 5 Programmer in hand, (wire out the top and switch at the bottom) you have three programming modes: 1) Right position is Speed Mode, 2) Left
position is Torque Mode and 3) Center position (straight up and down) is stock mode.

Precedent carts: have the programming port under the dash below the key switch

DS carts: have the programming port under the forward / reverse switch.

Programming is very easy and takes about 45 seconds. First, decide which program you want to use (speed). Second, with programmer in hand (as above), move the switch to the right (speed setting) position. Third, put your cart into TOW MODE. Fourth, plug the programmer into your programming port, and? Fifth, put the Tow / Run Switch into RUN MODE, while watching the lights on your programmer.

If at any time during this phase it flashes 5 times, pauses, and flashes 5 times the unit is not communicating with the controller and will shut down.

The third sequence of flashes indicate the program being downloaded into your controller:

Using these steps got my 2007 Club Car Precedent with stock tires up to 22mph.