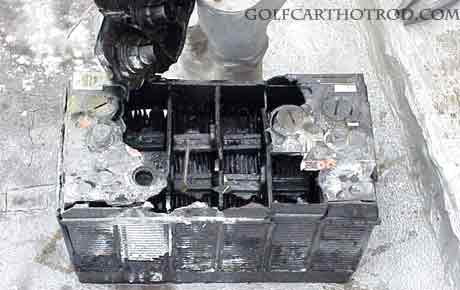 (AS) – Aiken S.C. man has his ear ripped off his head while checking the water level of his golf cart’s batteries.

36 year old Mark Lesnar looked under the seat of his 1995 Club Car golf cart just after unplugging from his battery charger. He was in his dimly lit shed so he bent down and fired up his lighter to check if the carts batteries had enough water in them. “Next thing I remember I was sitting on my rear, eyes burning and blood pouring down the front on my shirt.” Said Lesnar.

His lighter appears to have caused a hydrogen explosion. Pieces of the battery flew up a such a high speed that it knocked most of his right ear off. “I reached up to check where the blood was coming from and all I could feel was part of a nub sticking out where my ear used to be.” Explained Lesnar.

Lesnar’s eyes were spared major damage because of prescription reading glasses that he had on at the time. The blast was so violent that it knocked both lenses out of the frame.

He received a few small cuts on his forehead and neck but nothing else close to having his ear sheared from his head. Lesnar should be released from the Aiken Regional Medical Center sometime this weekend if he has no further complications. He will need a bit of plastic surgery down the road but Lesnar was in good spirits and said “I’m just happy to be alive and will look forward to getting home with my family.”