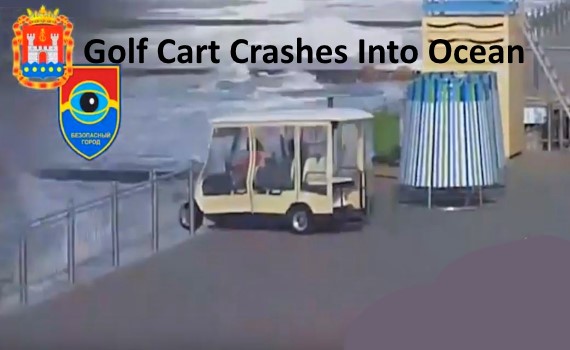 A Golf Cart Limousine full of passengers suddenly veers off course in crashes through barrier into the Baltic Sea. This took place at Zelenogradsk in the Zelenogradsky District in Kaliningrad Oblast, Russia, located 34 kilometers north of Kaliningrad.

Last Friday, September 13th, an incident occurred involving an electric vehicle (Golf Cart). The time of the crash was filmed by an eyewitness and captured by a street surveillance camera nearby.

The vehicle made a sharp maneuver, after which it broke through the fencing of the embankment and collapsed down from a height of several meters.

As a result of the incident, three people were hurt, including a married couple in the golf cart. As reported in the press service of regional police, the most serious injuries to a woman – she was hospitalized with burns received as a result of contact with acid from the battery of the golf cart.

That looks like a big drop down to the beach. They were very lucky that they only had minor injuries from the fall.