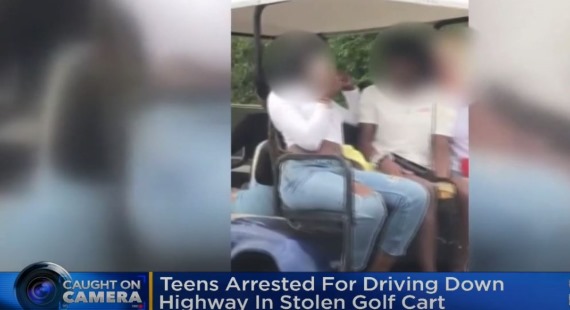 Girls Arrested For Driving Stolen Golf Cart Down Maryland Freeway. A group of teens were arrested for allegedly driving a stolen golf cart down Route 50 near Bowie Maryland.

Bowie Maryland Police said the teenagers were driving the golf cart on the highway because they had missed their Lyft from Bowie to Washington D.C.

They were later arrested and charged with stealing the cart from an apartment complex.

The video was filmed by Gregory Green on September 12, who was driving past the girls and told them that what they were doing was not safe.

“Even beyond the felony theft of a motor vehicle, there was certainly some poor decision making at play,” wrote Bowie Police Chief John Nesky in a statement. “It is extremely dangerous and reckless to operate a golf cart on a road, let alone a highway such as Route 50. The cart Is moving at such a lower speed that other drivers approaching it at the speed limit would not be able to see it in time to brake or avoid a collision.”