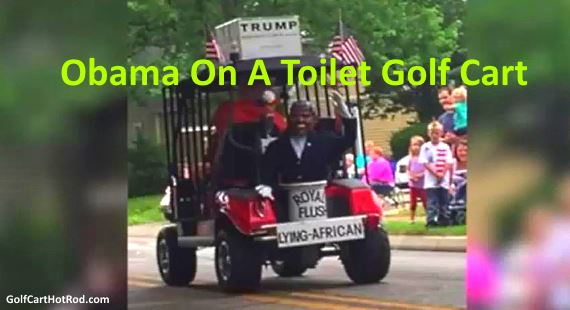 2016 4th of July Golf Cart video with the likeness of President Barack Obama causes a big stir. Many people are calling the golf cart of Don Christy a racist statement.

Sheridan, Indiana is a tiny rural community in northern Hamilton County with a population of under 3,000. Despite its tiny size, this town is receiving national attention for an entry in their annual Independence Day Parade.

Don Christy, 73, of Sheridan, drove a golf cart in the parade displaying Trump signs as well as Obama in a toilet. There was also a sign that said “Lying African.”

People at the parade took pictures of the float, and it quickly spread on social media. Many people are calling the float “hateful” and “racist.